Marvelous Murray did it.  I’ve been photographing the Wimbledon Tennis Championship for some time now and it was all leading up to the afternoon of 7.7.13 in SW19.  The only thing that bettered the weather was the result.  A straight sets victory over Novak Djokovic is no easy thing under any circumstances, but under the gaze of an entire nation deprived of victory since Fred Perry in 1936 it was nothing short of Herculean.  Andy Murray has had the ability for this win for some time but it is only since he has come under the wing of Ivan Lendl (who never won Wimbledon) that he has seemed to have that little bit extra to make it over the final hump.  I remember walking to the car park with The Independent’s David Ashdown last year and saying to him “I bet you never thought you’d see that?” when Murray made it through the semi.  There was only one way to better that result and he did it.

Due to demand, it is only one photographer per publication allowed on court at any one time. The shooting positions are split between five areas. The most sought after spot is the East Pit which is a trench on the opposite side to the umpire.  There are 40 odd seats there, the British newspapers were given six of them spread out along the length of the trench.  We had two seats in the West Pit situated behind the umpire and the players’ chairs, which restrict the view of the tennis, but are perfect to watch for reaction shots of the celebrities in the Royal Box and the players’ families and (girl)friends.  We had one more seat where the Chelsea Pensioners sit, near the players’ entrance/exit, and one more up high in the commentary box in the roof of Centre Court.  The other prime position is also an elevated one by the scoreboard, under the Royal Box, known as Platform B.  We had two seats on that too.

We collected our tickets and did a draw to see who went where.  After a bit of negotiating and haggling we all had our spots.  I was going to be in seat 32 East Pit.  My mate Murray Sanders from The Daily Mail had been in that seat for the Mens’ semis on Friday and looking at his pictures I felt it was a good spot for the final.  I got lucky and drew that seat.  I’d mentioned to Murray that I wanted that spot and he was nearly as pleased as me when I got it.

The seat you get dictates which lenses you use for different parts of the match.  My position was such that all the action at my end of the trench was perfect on the 70-200.  Action at the other end was on the 300.  I swapped my 600mm for a 500mm at Nikon.  My lens is an old version and weighs about three times as much as the 500.

I wandered over, with Cavan Pawson (Evening Standard) at around 1.40PM.  2PM was the start time and settled down for the match. There is a little shelf in front of the seats where you can dump your bits and bobs.  Space is at a premium on Mens’ Final day so it was a surprise to find I had an empty seat on either side of me which stayed that way till the final set.  Maybe the agencies weren’t that interested in Andy Murray.

Heathcliff O’Malley, my fellow Telegraph photographer was watching everything else apart from Centre Court.  He had the onerous task of keeping an eye on Henman Hill (Murray Mount surely) and was lined up to shoot the picture of the winner and trophy on the outer balcony of Centre Court.  We were hoping the balcony shot would be Andy with his girlfriend Kim Sears (a favourite of all the Brit papers) and the trophy.  If it had been it would have knocked all the Centre Court stuff off the front of every British newspaper. It didn’t happen, but if it had …

It was roasting hot.  The crowd were buzzing.  I was almost thinking it would be easier if Djokovic won because the pressure would be off.

The last time I heard a roar like the one Murray got was in The Velodrome when Chris Hoy took to the track during last year’s Olympics.

It was electric.  Murray played a blinder, the way he’s always been able to.  His head was right and we got to 3 match points.  It went to deuce.  Maybe Djokovic could make a big come back, you can never write him off.

Murray won.  He was at the far end from me and when he won he turned his back on all of us and faced the scoreboard.  I don’t think he was being awkward I just think he didn’t know what to do.  Apparently Chris Hoy was sitting in that corner.  Either way, when he did turn there was an avalanche of pictures.

Lots and lots of pictures but no real ‘moment’.  The best potential was when he climbed up to the players’ family box to celebrate with his girlfriend, trainers and family.  If he had stopped and stood on the wall in the middle of all the spectators and given it a big roar and double fist punch we’d have had an amazing finale.  He didn’t.

The photographers who had armbands to go on court (another draw) and photograph the presentation went on court and the rest of us waited in the pit to see what we would get as he walked around with the trophy.  I watched him through the 500 as he sat in his chair waiting to be called for the presentation and saw his changing expressions… mostly disbelief… or maybe shock.  He seemed to be somewhere between ecstasy and confusion.

He got the trophy and I photographed him holding it aloft.  It was the picture we used on the front of The Daily telegraph.  He held it and kissed it for the privileged few on court then paraded it around the court.  My position never got a kiss but I didn’t think that was ‘the’ picture anyway.  The powers that be wanted what I’d sent, the Picture Desk said it was the only one amongst thousands they’d seen that showed him actually grinning like he was really totally ecstatic to have won.  It was a piece of history and I’m chuffed it was what they wanted and what they used.

My favourite picture is one of the trophy showing the last British male winner’s name and date ‘Fred Perry 1936’ on the trophy with Andy’s face reflected.

I’ve also included an early Murray picture …  I wonder if you can spot it: 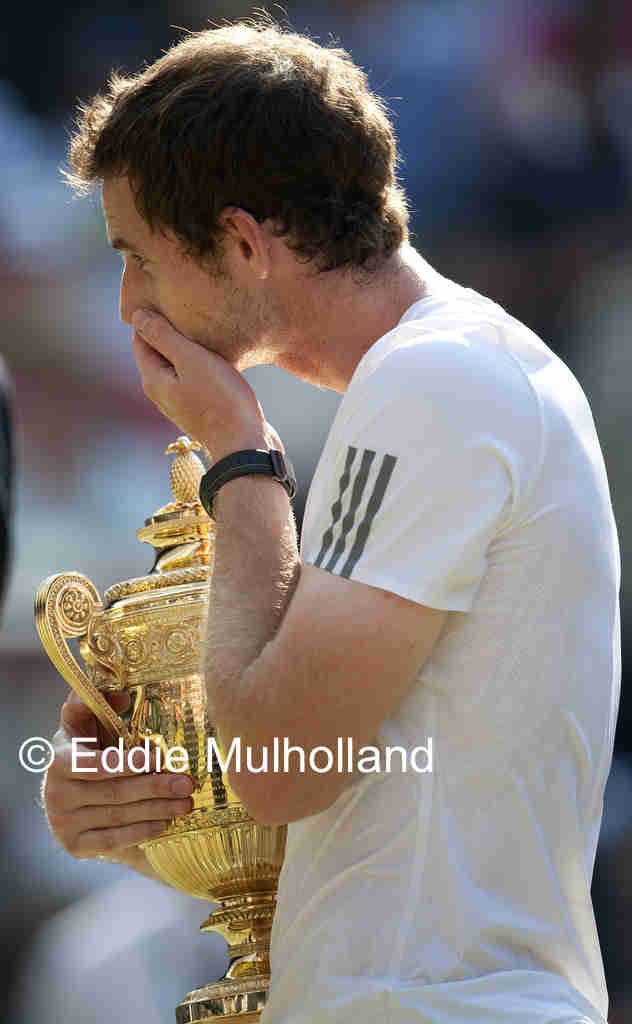 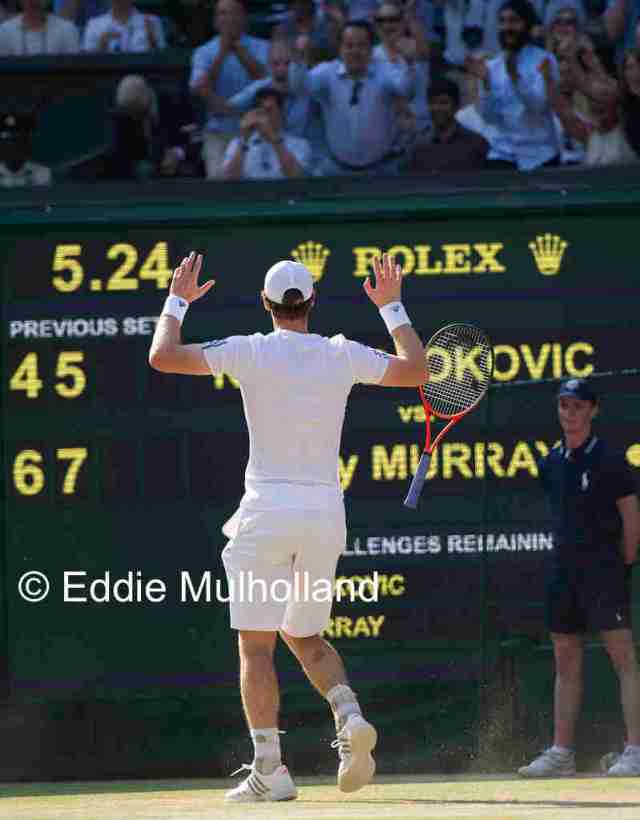 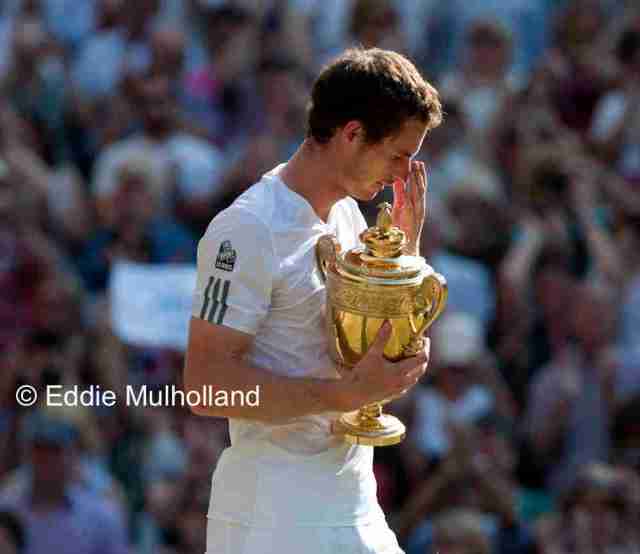 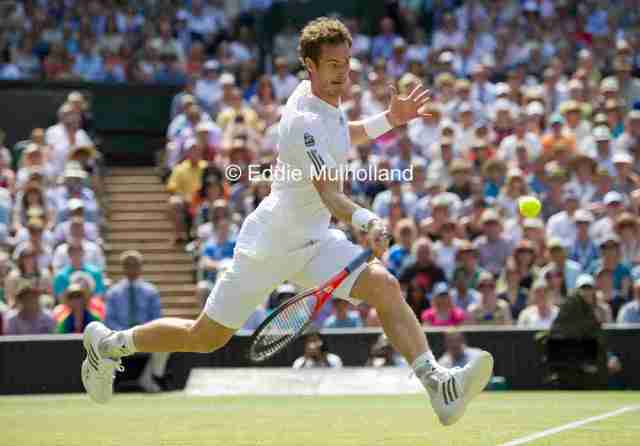 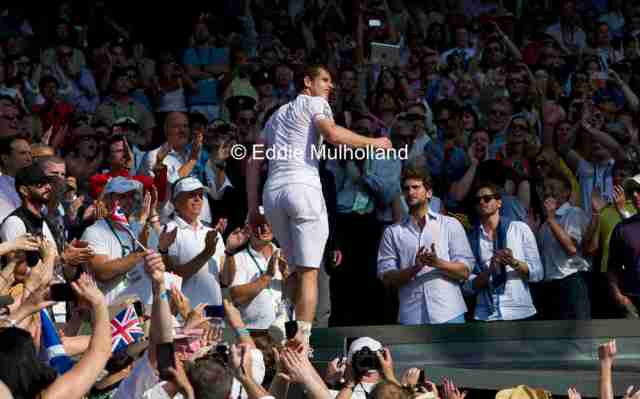 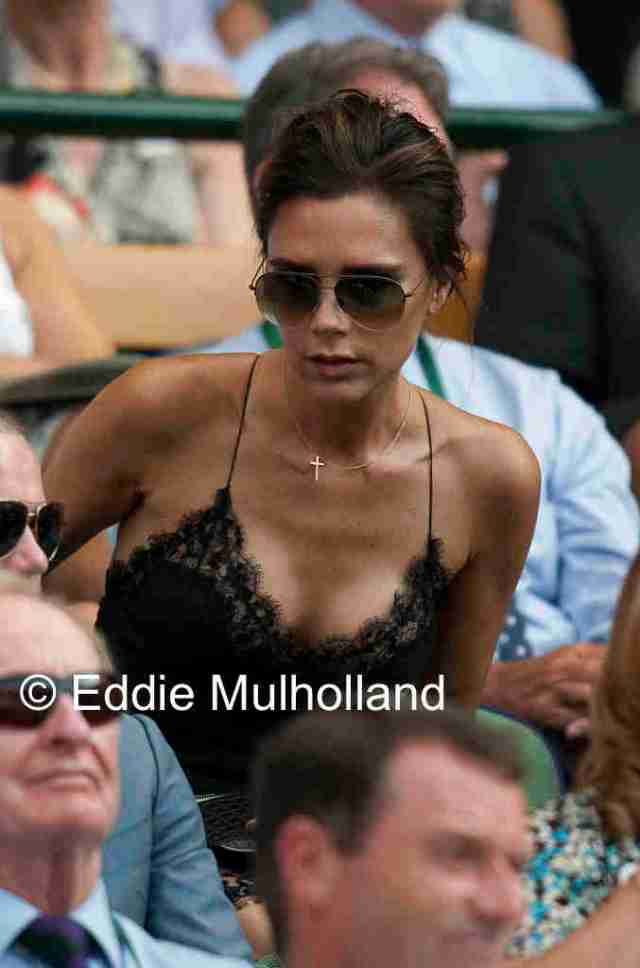 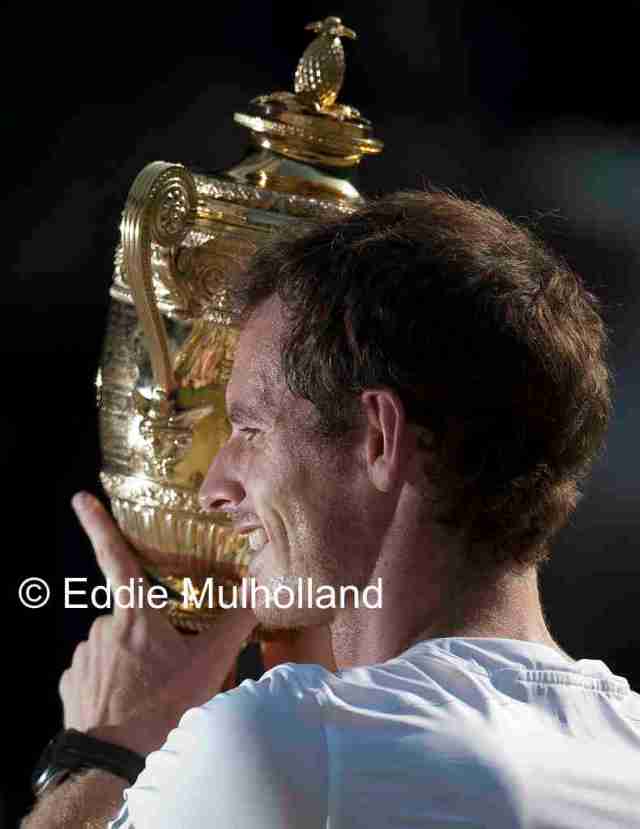 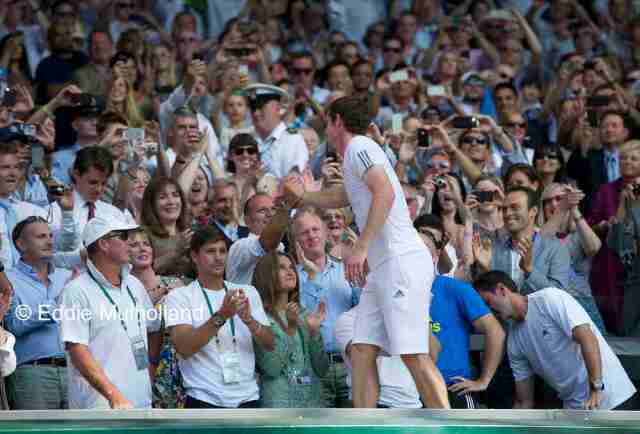 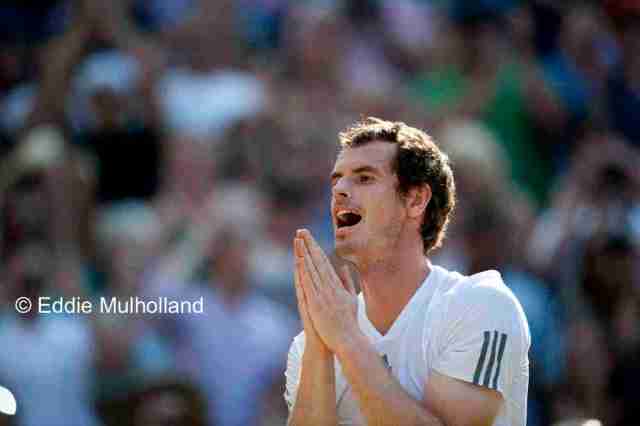 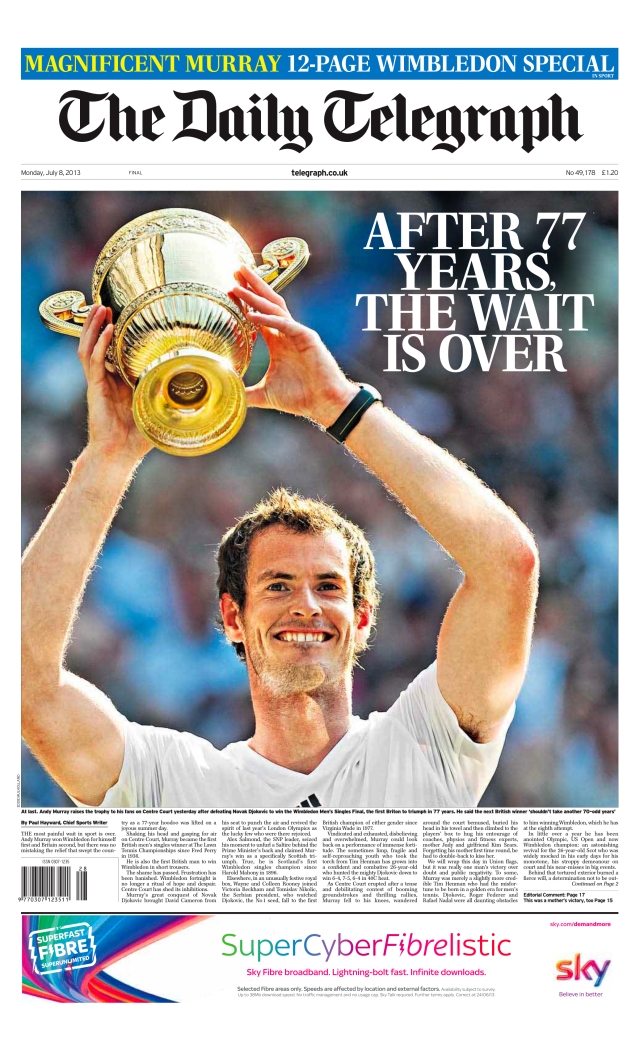 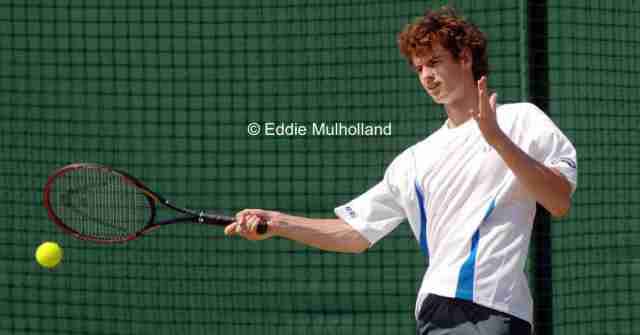 Check out my EyeEm versions of some of these and others at eyeem @edmulh or on Twitter https://twitter.com/eddiemulh

News Photographer for The Daily Telegraph and former Vice Chairman of The British Press Photographer's Association.
View all posts by eddiemulh →
This entry was posted in Uncategorized. Bookmark the permalink.